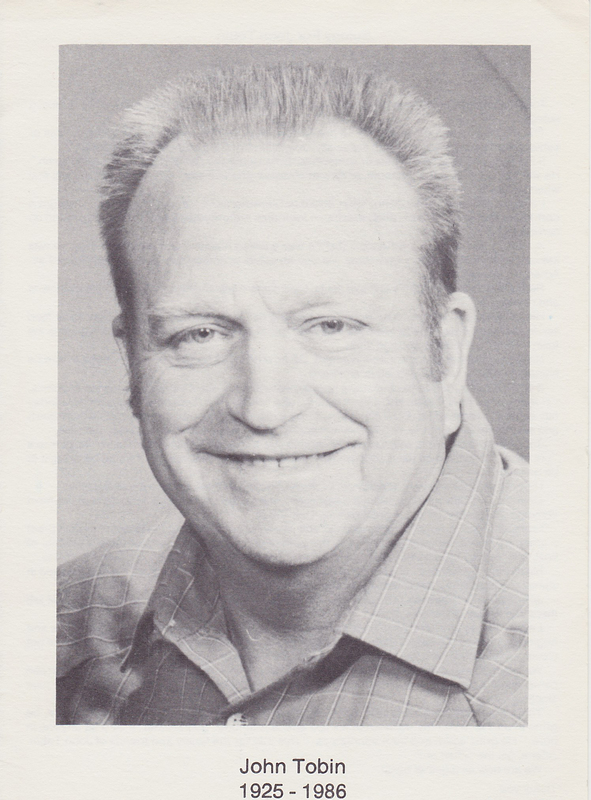 Eulogy written by Thomas Sheridan at the time of John Tobin's death.

Today we are gathered here to pay homage to John Tobin. This is usually done in the form of a eulogy.

The dictionary defines eulogy as "a public speech or written tribute extolling the virtues or achievements of a person or thing; especially, an oration honoring one recently deceased."

If I asked John to list his virtues or achievements he would say something like: "Virtues, humh," He would then think a few seconds, smile that sheepish grin and say; "Oh, yeah, virtue, I lost that when I was 16."

I’d say seriously; "Now John, what about achievements?" He would answer: "I’ve got a certificate that says I’m a certified mechanic for Indian motorcycles and I'm the best around on carburetors."

In truth, some of John's virtues are that he was a loving husband and devoted father. He was keenly competitive, yet very charitable. He was an astute businessman. He was 100 percent all-American. A true patriot.

Rather than list all of John's achievements. I will name a few and leave the rest to the politicians and newspapers.

His business savvy let him rise from filling vending machines to head a multi-million dollar food service company. His political know-how allowed him to be a Town Father for 30 years guiding the town through good times and bad times.

His family was his proudest achievement. Oh how he loved large family gatherings where he managed to keep everyone together and happy.

It is atribute to John to have so many people present today. All of us here are friends of John's, yet many of us do not even know each other. John was our link. I am sure everyone here today has some anecdote about John. If you would take amoment in the next few days, write them down and send them to the family. I know they will appreciate it. That will then become our new link.

John had a few favorite sayings that he liked to use at the appropriate time. One of those was a "pet name" for us that he used affectionately, whereas anyone else using it, it would be thought to be derogatory,

I know that John was very affectionate of me for he used that pet name to me all the time.

Over the past few days people have said many fine things to me about John. One of the, most common ones is that he was agreat person. That is true.

Maybe this "greatness" is what kept John constantly striving toward a goal. He was involved in something at all times, never resting or reflecting on the past.

John's soul is in heaven now, and knowing John he has managed by now to get the best job there: the keeper of the holy gates.

I would like to take everyone on a journey. Please close your eyes, tip back your heads and begin to visualize the pearly gates. As we approach, there is a long line in front of us. As we get closer, we can begin to make out a figure ahead directing people.

We begin to make out John's face. We notice his uniform: the old blue sweatshirt, the green pants with the ripped fly front with a rope for a belt, the unlaced Ski-Doo boots, and the navy-blue stocking cap.

There he is with his bullhorn directing people to the correct lines. We now catch his eye, he grins at us. He raises the bullhorn to his lips and announces: "Oh brother, they'll let anyone in here." He grins again and then announces: "This way for the family and friends of John Tobin. Arlene, get the coffee on.”

We are now all together again. 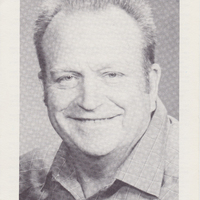 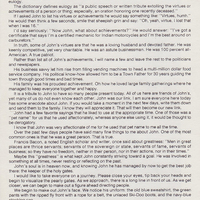