"I Remember. Do You?" - A remembrance of early 20th century Maynard by Alice Warren 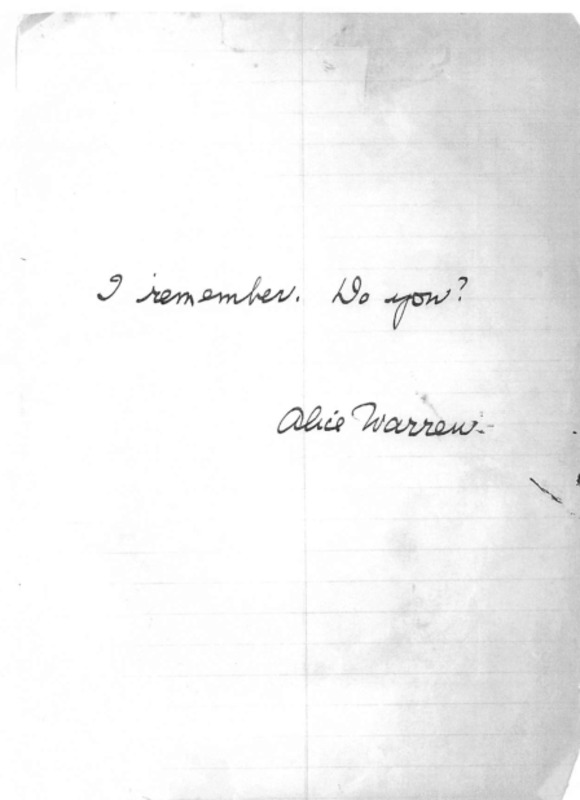 "I Remember. Do You?" - A remembrance of early 20th century Maynard by Alice Warren

Alice Warren, who was a resident and school teacher starting in 1914, writes about her memories of the early years after she came to Maynard. Also included is Mrs. Warren's obituary.

I remember. Do you?
by Alice Warren

I was asked to write about what Maynard was like when I first came to town. I was one of the many school teachers who were hired to teach in the public schools. At that time it was customary for the teachers to live here during the school year.

The sun was shining that September Sunday when I left the train at the station. I was amazed at the crowd that came to meet it.

There were many boarding houses along Main Street and that day the porches were filled with ???? enjoying the comfortable chairs and watching the crowds go by. Everyone seemed to be walking as there were very few motorcars at that time.

I entered the school system under Mr. Brick and found my work most interesting.

I was surprised to see so many tow-haired children. They were courteous, and the parents cooperative and it was a joy to teach here.

One of the outstanding clubs at that time was the Maynard Women’s Club which was at its height with 200 members and a waiting list. Teachers were honored guests and were allowed to close school early so as to attend the meetings. The programs were outstanding. The members dressed in their silk and satin gowns with hats, and white kid gloves. In looking over one of the old reports, I came across a notation where someone suggested that the Street Railway was to be asked to lower the step on the trolley as the women were required to show too much of their limbs in getting aboard.

The churches were very busy places in those days. With clubs for the young people it was an excuse to get out of an evening and the rule was to get home right after Christian Endeavor and ??? In the old days you were hired a pew in some of the churches, and if the family was small you paid for half a pew.

The town seemed a very busy place to me with so many trains and street cars coming in and leaving. I sometimes think it was easier to get one out of town then than it is now. Street cars went up Nason Street to the Actons and the length of Main Street to Hudson and Concord. At times there would be standing room only and you could ride all day for a dollar. Many people went on excursions to the Street Railway parks in Lexington, Whalom, Canobie Lake, and the Clinton Dam which was being built then.. This was a great treat.

As for recreation there was plenty to do. There were many Finnish people who put on their snow shoes and skis and it was a happy sight to watch them come over the hills. ???? rides and sleigh rides in winter where the destination called for a good oyster stew or chowder to break up the ride. There were livery stables where one could hire a horse and buggy and take rides along the countryside during the different seasons. Bicycles had been at their height before I came here and I loved to hear of the Priest Brothers and their many friends and the distances they made in a day. It almost seemed impossible. Canoeing on the river and at Lake Boone, skating in the mill pond, dances, balls, band concerts, baseball, and basketball games at the “Rink“ just added all kinds of fun for the young folks. Sideshows and Chautauqua came regularly and once a real circus was rerouted into Maynard. The movie houses where the shows were changed twice a week and where all could attend without seeing any movie in bad taste.

Every nationality had its own clubs and organizations and entertained the people at least once a year. At that time there were quite a few Scottish people and I especially enjoyed their shows. Everyone asked applauded "the ???? ?? on Harry Lauder.“

I went away from Maynard for a while and came back as a housewife. In those days I did not have to go out and pick up groceries, for good Mr. Morse, from the Riverside Corporation, came in the morning to take your order and bring it back by 4 o’clock in the afternoon. On Sunday morning a man came around with beans, brown bread, horse-radish and succotash. Fresh fish was brought into town twice a week and came to your door. Numerous cats followed the wagon and every once in a while a fish head would accidentally(?) fall off the tail-board to get rid of the animals.

I never knew what real fresh strawberries, corn and asparagus tasted like until I came to Maynard. Such a difference from produce bought from fruit stands. Farmers picked their corn, left it at the back door step, you helped yourself and left one cent an ear.

Many people bought flour, sugar and other items by the barrel and it was quite a sight at the railroad station when this landed. Those who could, baked their own bread. It was a poor house wife who bought her bread. It was 5 + 10¢ a loaf at the store and pretty poor stuff

We did have excellent stores. Case's, a large department store, where you could purchase anything from a collar button to a pair of shoes, and many other good stores to take care of all of our needs with never a necessity to go out of town. We didn’t have motor cars, planes, supermarkets, and five and ten cent stores, but we did have a library, good schools and all those beloved people who gave of themselves to make our town a blessed place to live.

As I reread this it makes me think of the little lad who looked up in my face and said “Mrs. Warren did you really know Abraham Lincoln?“

Photocopy of a Handwritten Letter 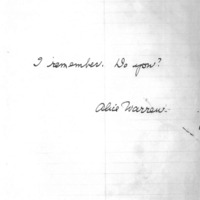 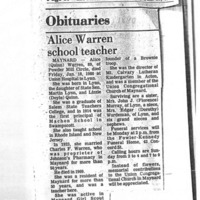