The senior class accompanied by relatives and friends on a class trip to the nations capitol. The trip took place during the April vacation leaving on a Friday by train to Providence, RI and then an overnight boat ride to New York City before boarding a train to Philadelphia for a stay and tour of the city. The class took a train to Washington and toured the city. Returned to New York and stayed overnight and took boat back to Providence on the following Friday.
This was the last class trip to Washington due to WWI and the trip was never revived. 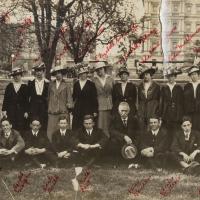