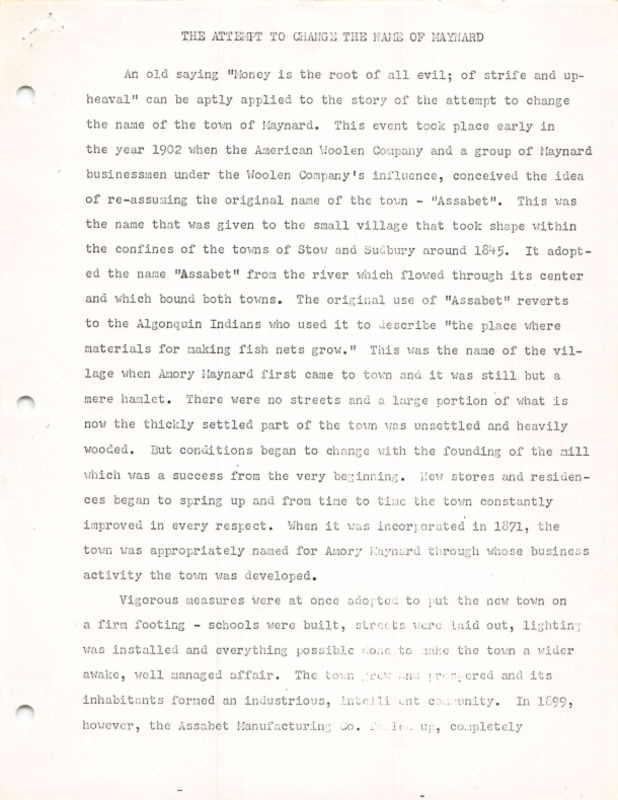 Prior to its incorporation in 1871 the Town of Maynard was known as the village of Assabet, after the river that flows through it. At the time of incorporation the name "Maynard" was chosen to honor Amory Maynard, whose mill was the primary source of prosperity in the town. In 1902, Maynard's enterprise "Assabet Manufacturing Co." collapsed unexpectedly, removing both an important source of revenue, but also the savings of many employees as the mill was the town's "bank".

The monograph walks through the history of an attempt by a number of people in town who wished to rename the town to "Assabet".

Excerpt:
THE ATTEMPT TO CHANGE THE NAME OF MAYNARD

An old saying "Money is the root of all evil; of strife and upheaval" can be aptly applied to the story of the attempt to change the name of the Town of Maynard. This event took place in the year 1902 when the American Woolen Company and a group of Maynard businessmen under the Woolen Company's influence, conceived the idea of re-assuming the original name of the town "Assabet". This was the name that was given to the small village that took shape within the confines of the towns of Stow and Sudbury around 1845. It adopted the name "Assabet" from the river which flowed through its center and which bound both towns. The original use of "Assabet" reverts to the Algonquin Indians who used it to describe "the place where materials for making fish nets grow." This was the name of the village when Amory Maynard first came to town and it was still but a mere hamlet. There were no streets and a large portion now the thickly settled part of the town was unsettled and heavily wooded. But conditions began to change with the founding of the mill which was a success from the very beginning. New stores and residences began to spring up and, from time to time, the town constantly improved in every respect. When it was incorporated in 1871, the town was appropriately named for Amory Maynard though whose business activity the town was developed.

Vigorous measures were at once adopted to put the new town on a firm footing - schools were built, streets were laid out, lighting was installed and everything possible done to make the town a more wider awake, well managed affair. The town grew and prospered and its inhabitants formed an industrious, intelligent community. In 1899, however, the Assabet Manufacturing Co. failed up, completely unexpectedly not only crippling the town's great source of revenue but also blotted out $132,000 which the Mill operatives had deposited within the company, there being no town bank at that tine.

It was at this tine that the first whisper against the Maynard name so closely allied with that of the Assabet Mills effected the suggestion that the town adopt a new name, but a leader was lacking and nothing definite was done.

The feeling did not die however, and when the American Woolen Co. stepped into the picture and asked for a change in the town's name for business reasons, the idea met with great favor from a portion of the populace, while still another portion favored retaining the old name.

On February 4, 1902 a petition to change the name of the town was presented to the committee on towns in the State Legislature. Among the petitioners were James B. Lord, Luke S. Brooks, Ralph Whitehead, Dr. F. U. Rich, Thomas Naylor, Julius Lowe and the American Woolen Co., William M. Wood, Treasurer. It became House Bill No. 903 and reads as follows:

"An Act to Change the Name of the Town of Maynard".

Section 1:
The Town of Maynard in the County of Middlesex, shall take the name of Assabet.

Section 2:
This act shall not take effect unless accepted by a majority of the legal voters of said town, present and voting, thereon, by ballot, at a special meeting held upon notice given at least seven days before the time of said meeting, and the polls shall be open at nine oâ€™clock of the forenoon and shall not be closed before
four oâ€™clock in the afternoon of said day, nor remain open longer than six oâ€™clock in the afternoon of said day.

Section 4:
This meeting shall be held within 90 days of the passage of this act.

In the summer of 1967 a portion of the residents of Maynard were shocked and saddened by the action of Maynard Industries in filling in a section of historic Mill Pond which it controls. There again - money talks, and nothing was done about it. The newspapers, received letters, and editorials were written on the subject.

Such was also the case in 1902 and Maynard received some controversial publicity. Here are some of the printed reactions: 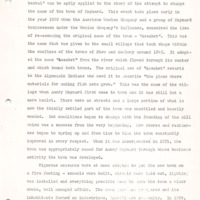