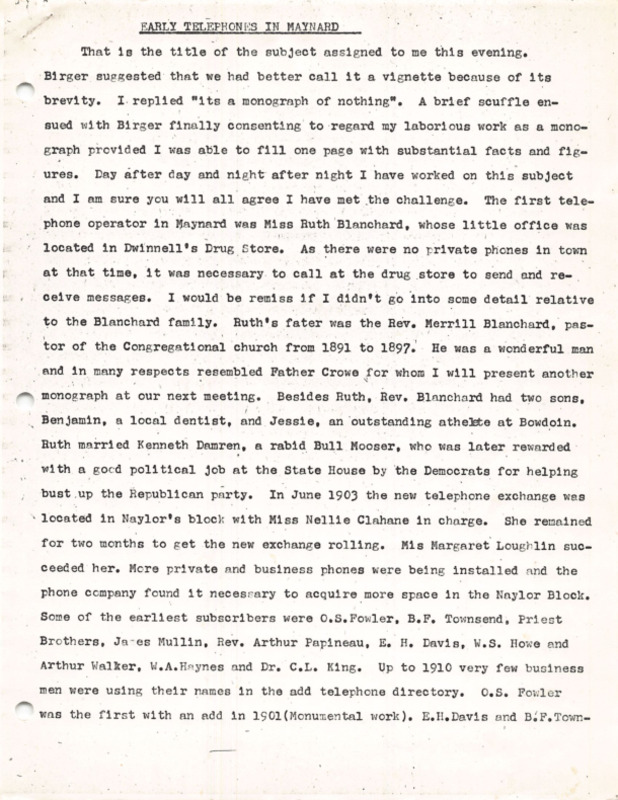 "Early Telephones in Maynard" - That Is the title of the subject assigned to me this evening.
Birger suggested that we had better call It a vignette because of its brevlty. I replied "Its a monograph of nothing". A brief scuffle ensued with Birger finally consenting to regard my laborious work as a monograph provided I was able to fill one page with substantial facts and figures. Day after day and night after night I have worked on this subject and I am sure you will all agree I have met the challenge.

The first telephone operator In Maynard was Miss Ruth Blanchard, whose little office was located In Dwinnell's Drug Store. As there were no private phones in town at that time, it was necessary to call at the drug store to send and receive messages.

I would be remiss If I didn't go Into some detail relative to the Blanchard family. Ruth's father was the Rev. Merrill Blanchard, pastor of the Congregational church from 1891 to 1897. He was a wonderful man and In many respects resembled Father Crowe for whom I will present another monograph at our next meeting. Besides Ruth, Rev. Blanchard had two sons, Benjamin, a local dentist, and Jessie, an outstanding athlete at Bowdoin, Ruth married Kenneth Damren, a rabid Bull Mooser, who was later rewarded with a good political Jjob at the State House by the Democrats for helping bust up the Republican party.

In June 1903 the new telephone exchange was located In Naylor's block with Miss Nellie Clahane In charge. She remained for two months to get the new exchange rolling. Miss Margaret Loughlin succeeded her. More private and business phones were being Installed and the
phone company found It necessary to acquire more space In the Naylor Block. Some of the earliest subscribers were O.S. Fowler, B.F. Townsend, Priest Brothers, James Mullln, Rev. Arthur Papineau, E.H, Davis, W.S. Howe and Arthur Walker, W.A.Haynes and Dr. C.L. King.

Up to 1910 very few businessmen were using their names in the telephone directory. O.S, Fowler was the first with an ad in 1901 (Monumental work). E.H. Davis and B.F. Townsend followed in 1902.

With the complete destruction of Naylor Block by fire In 1917, the telephone company was forced to move to its new quarters located in Mannings Block in 1921. where it remained for fourteen years.

I must not forget to tell you about the phone strike by Local 12-A, June 1919, in which six local operators were involved. Below are their modest demands:

Yet, they speak of the good old days. Incidentally, the strikers won out.

Many of my listeners can recall the old box telephones with the crank on the side. There were usually six or eight people on the so-called party line with every one listening in.

Paul Revere might have been a news spreader but he could have learned so much more if he could have continued his drive to Maynard. Their eaves dropping reminds me of a minstrel joke I used to use:

The various telephone companies have made marvelous innovations since the old days of the crank-box. We now enjoy direct distant dialing, and the new push button system, and I predict that within three years we will be able to see the image of a person on the other end of the line. So be prepared to put on a shiny face.

The telephone company has made tremendous strides. You can get an idea of its healthy growth when you consider the town of Maynard has now approximately 4000 subscribers.

These were all operators. Those on the distaff side usually performed day work, while the young men were night workers.

I suppose you are all expecting me to conclude my monograph with a wee bit of humor. Frank Riley and I were high school classmates. In the evening he worked for the New England Telephone & Telegraph Company and quite often I would keep him company for a few hours. One night he pulled a fast one on me. He casually asked me who liked best, Nellie Clahane or Julia Mahoney. Now, besides being the chief operator in Concord, Julia was also my godmother. At that moment, without me knowing it. Frank plugged in the Concord switchboard, and the local operator listened to the whole conversation, which ran something like this: "of course I am very fond of Julia, being my godmother, but I would have to choose Nellie, as I think she is one of the most beautiful girls that Concord ever produced." From that day forward I never again received a Christmas gift from Concord.

Again, I would be remiss if I did not pay tribute to all our Maynard operators, who because of automation were forced to give up their Jobs. They were always on hand to report any fires, to call doctors in time of distress, in fact they were Johnny on the Spot for any emergency.

With this thought in mind, I will now conclude my vignette, pardon me, I mean monograph. 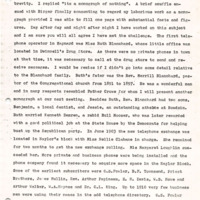